How Obamacare Repeal Could Change Your Retirement Plans

President Donald Trump said in an interview before the Super Bowl that replacing the Affordable Care Act could take the Republican-controlled Congress and his administration until next year. House Speaker Paul Ryan said Tuesday that the legislation will be completed this year, though a potential rollout may take until 2018.

Depending on if and how the law is scrapped, retirees and those headed for retirement could face higher costs for prescription drugs and preventive care.

Related: Conservatives Are Impatient with Trump’s Slow Repeal of Obamacare

Though Obamacare primarily dealt with how to provide health insurance coverage for those who didn't have it, the law also delivers free preventive services to Medicare beneficiaries and lowers their out-of-pocket prescription drug costs.

Some of the proposals from Republican lawmakers, including one from Rep. Tom Price, Trump's nominee to be Health and Human Services secretary, would end these provisions in the Affordable Care Act.

The donut hole and preventive care

The donut hole means that older Americans pay a higher percentage of their drug costs when they spend between roughly $1,250 and $4,950 out of pocket in 2017, said Tricia Neuman, director of the Kaiser Family Foundation's Medicare policy program. (See chart below.) 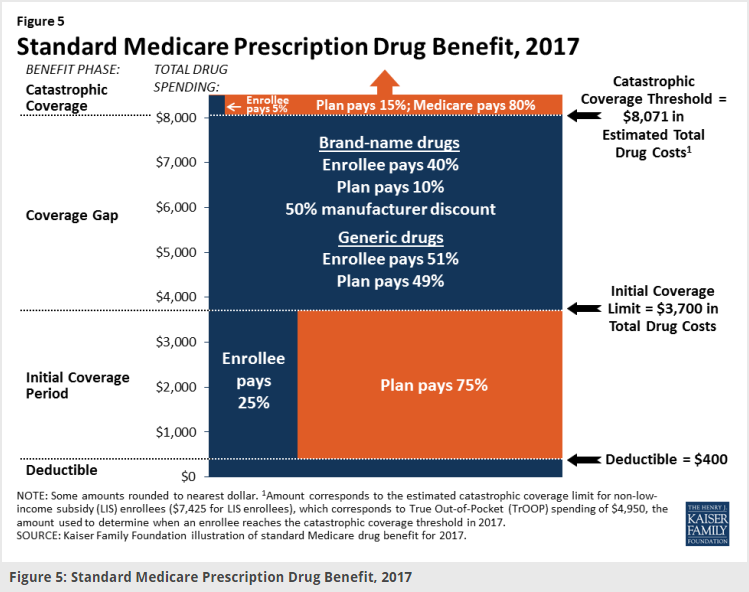 "The ACA reduced drug costs for seniors on Part D with relatively high drug bills, which could be due to one really high-priced drug for a condition like hepatitis C or because they take multiple brand-name drugs," Neuman said.

Related: The Potential Cost of Obamacare Repeal: 32 Million Without Insurance

Roughly 9 million of the 38.7 million people, about 25 percent, enrolled in Part D have drug spending high enough to reach the coverage gap, according to the Medicare Payment Advisory Commission.

If the law is left unchanged, the Affordable Care Act will close the donut hole by 2020.

A repeal of Obamacare also could increase the cost of preventive services. Under the law, Medicare enrollees receive precautionary care, such as breast cancer screenings, colorectal cancer screenings and flu shots, free of charge to them.

Among the six Republican plans analyzed by the Kaiser Family Foundation that seek to end Obamacare, two would stop the closing of the donut hole and require Medicare enrollees to share in the cost of preventive services. A third proposal doesn't specify what would happen to these provisions of the Affordable Care Act in a repeal. Under House Speaker Paul Ryan's "A Better Way," Medicare enrollees would share in 20 percent of the costs for all covered services under a restructured benefit design.

What you can do to prepare

No one knows exactly how lawmakers will craft a replacement for Obamacare and Trump said that he would not cut Medicare benefits during the presidential campaign. Whatever happens, there are things you can do to prepare yourself and your finances for any changes to retiree health care.

"The No. 1 most important thing is to live a healthy lifestyle," said Carolyn McClanahan, a physician, a certified financial planner and director of financial planning at Life Planning Partners in Jacksonville, Florida. Many of the drugs prescribed to older Americans address conditions that could be helped with a better diet and exercise, she said.

Related: Could a Hybrid Obamacare Plan Bring the GOP and Dems Together?

Good health won't solve everything. McClanahan encourages her clients to be "empowered patients" who shop around for lower-cost generic alternatives to their medications and question whether medical tests are necessary when doctors order them.

Medicare open enrollment season is over, but you can make sure you have a plan that works well for you next year.

The Medicare Plan Finder on the Medicare website is a good starting point. The tool will compare Medicare plans by ZIP code. You will need to list the prescription drugs you take. When using the tool, make sure you name what pharmacy you visit regularly.

"Be a smart shopper. Many people are overspending on a plan that isn't right for them," said Katy Votava, president of Goodcare.com, a health-care consulting firm and author of "Making the Most of Medicare: A Guide for Baby Boomers."

Need a human being to help you navigate the confusing mess of Medicare jargon and benefits? You can talk to someone at Medicare by calling 800-MEDICARE (800-633-4227) or a person at the Medicare Rights Center's free hotline 800-333-4114 or a counselor at your state's health insurance assistance program. All these people are required to give you unbiased advice about your Medicare options.

However, these steps may not be enough to keep your retiree health costs contained.

Historically, inflation averages 3 percent annually, though not since the financial crisis, and health-care costs for seniors usually rise 6 percent per year, said Ron Mastrogiovanni, president and CEO of HealthView Services, which helps financial advisors forecast health-care expenses for their clients.

With the Social Security cost-of-living allowance increases for 2017 at just 0.3 percent, older Americans have a tough time keeping up with rising health-care expenses, Mastrogiovanni said.

"It's not going to impact affluent retirees, it's going to affect the average retiree," he said. "How are we really going to ensure that these are the golden years for people?"

This article originally appeared at CNBC. Read more from CNBC:

Here's why the Trump trade is not over yet